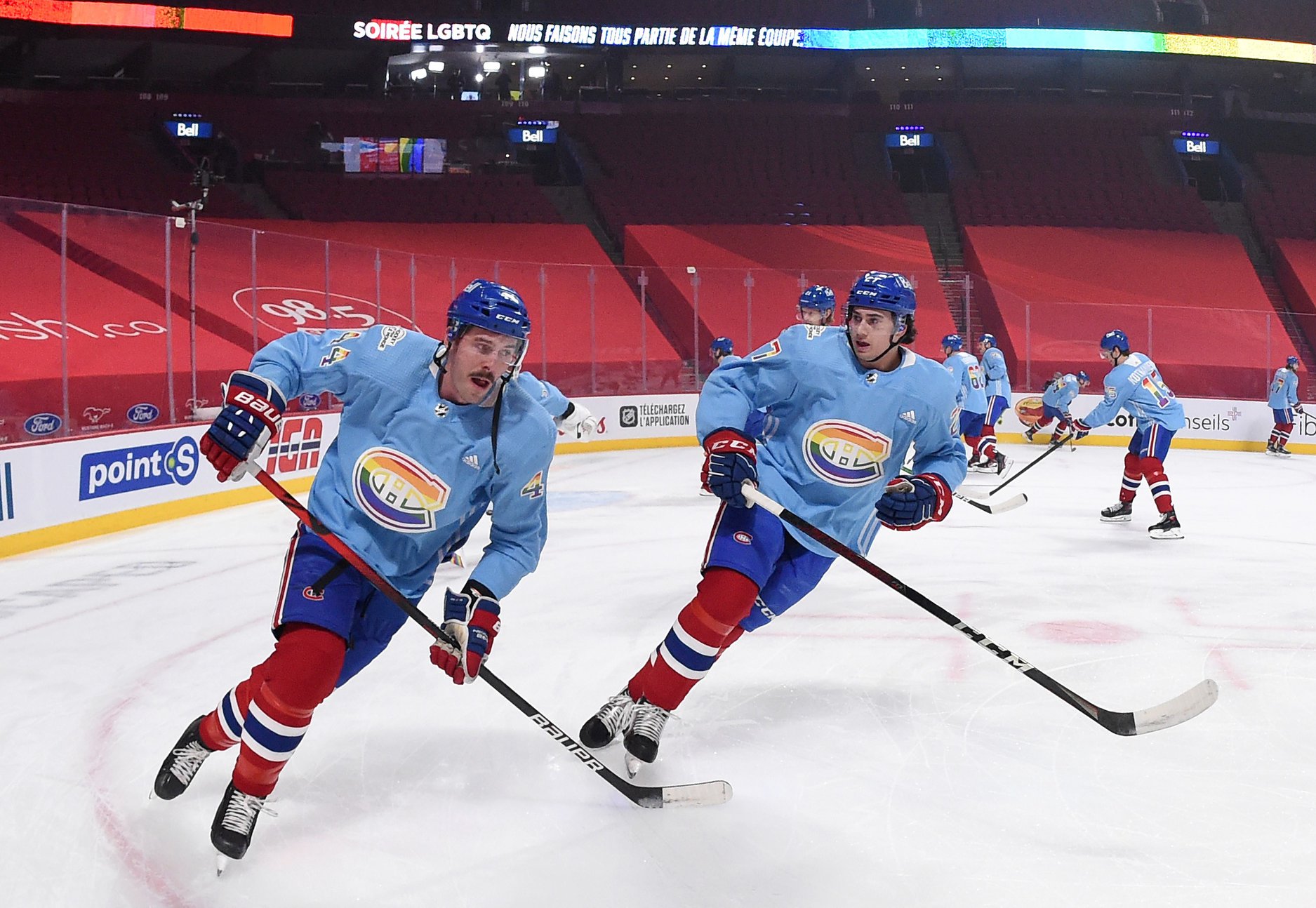 Schrodinger’s cat.  One cannot look inside the box and see the cat in both states of mortality.  What can be done, however, is to look into an alternate reality, a parallel universe of sorts in which the Montreal Canadiens are alternatively coached.  Wish lists may be compiled by those seeking other options for the staff of Les Glorieux and so comes the concept of quantum coaching; while Michel Therrien can be seen behind the bench from game to game in one realm, this realm looks at the possibility of new formats, new ideas and adjustments that appear necessary.

The only candidate in this experiment being myself, I will be all that is “seen” in place of the Canadiens current coaching staff.  Hypothesis: adjustments made will address team needs appropriately, minimize losing margins and increase winning margins as well as the team’s winning record.  Grab a seat, I’m about to go into the room and address the team…

Guys, our record is good but it could be better, regardless of what rank we are in the league.  If we’re competing with others in the standings, we have the wrong mindset.  The idea is to compete with ourselves and focus on getting ourselves higher rather than just getting past a certain point or a certain opponent.  On a game to game basis, I see some things I like and I see some things I don’t like.  The first thing that has to go, effective immediately, is the dump and chase.  It’s a bail out option when nothing else is open but considering our speed and skill, there should always be something open.  We’re going to carry the puck in the zone since it is 2.5x more likely to generate a scoring chance in our favor.  This team has a plethora of offensive weapons and I intend to use them.

Let me say this again: we’re not a grinding team, we’re a speed and skill team.  Accept it, do it.

I’m going to only ask you guys to play the way that you naturally play.  You are all being let off the leash because I have nothing that I want to hold you back for and to do so would be completely illogical.  P.K., I want you to play like the gunslinger you are and set the template for what kind of game this team should be playing.  Emelin, I want you to start throwing your big, booming hits again but since you aren’t and you exhibit blatant thoughtlessness from shift to shift, you’re sitting in the press box.  Allen, you can join him until someone is injured or is sent down and in your respective places are going to be Nathan Beaulieu and Jarred Tinordi.

This brings me to my next point: mistakes will not be tolerated but they are going to happen.  I understand that.  I don’t want you guys playing scared and tentative.  Open yourselves up and play with confidence.  You young guys are going to be held to the same standards as the veterans and vice versa.  To do anything otherwise would make no sense and be completely unfair, sending a frustrating and inaccurate message to this team.

If you haven’t heard your name yet or been informed of any changes being made, the lineup is going to look like this for most games, subject to change based on our opponents.  There are some things I would like to do differently but since I am not the general manager, I have this to work with until further notice.

Pairings and trios are subject to change, namely Beaulieu and Tinordi’s partners as well as Gallagher and Sekac but anyone can move anywhere.  The truth, though, is that like Marc says, “you make the decisions for us.”  It’s not just some bullshit slogan because you really do force our hand but this is what looks best to me.  After all, I’m going to be a player’s coach.  Hockey is completely over coached and what I want to do more than anything else is simply suggest ideas and formations to you.  With that in mind, here are a couple things that I have in mind.

Our first play idea is going to be in a situation that you guys will most likely come up with as the opening presents itself but this is one I would like to see if it should happen to be there.

put the starting spot for whichever player gets the puck for the exit from the defensive zone and this streak here marks about where he has to get.  Defence, I want you following all the way up, ready to enter the offensive zone in case the cycle needs to get set up but the key is to have the puck carrier explode up the wing if there is any defence in our way and for the man in tow down the middle to get to the far post so that all we need is for that man to tap it in.  The trailer can be our third forward or if you guys want to change it up and put someone like P.K. in there, by all means, do it but communicate to make that happen.  This guy is gonna come in useful if the man down low is covered.

As for special teams, the penalty kill can be tinkered with later on if need be but the fact is that all of our work needs to go to our power play.  For such a talented team, we should be the best in the league.  Period.  We need guys on their one timer sides but we also need proficient positioning.  Max, you are almost never put into a position from which you can really score on the power play and that is a huge detriment to us.  Here we take a whole new approach and we put ourselves into a diamond formation with an extra man at the core of it.

We can spread out or crunch in as the openings come to us but this way we either open up the shooting lanes against a box formation or we open up the passing lanes against a diamond formation on their penalty kill.  For the guys on the line of three in the middle we want to use guys like Chucky or Larry in the middle, Max or Sekac on the right with their left shot and P.A. or P.K. on the right if P.K. is not at the back.  If he’s not, Markov, Beaulieu, Gonchar, basically anyone that’s looking sharp and aware out there during the game can have that spot.  What you should notice in front is that the likelihood is that we will have a defenceman there but Gally is also an obvious candidate.

However, I’ve got someone in particular in mind for that spot.  The guy we are giving that spot to is Jarred Tinordi.

We have enough speed on the back end of this formation if we use Beau or P.K. especially in case we can’t have Tin Man rush back from the front of the other team’s net but that shouldn’t be our first thought.  Again, we don’t play scared; we play aggressive offence and push the pace.  The reason for Tinner being up front is obviously his size since it will help all of you and maybe even himself put up way more points than we have been with the man advantage.

Chucky and Larry need the middle because they get their chance to play their natural position, especially big for Galchenyuk if we are going to move him there permanently in the future so we can try him here with a man advantage first.  We also need their hands and reasonable size to command and work within all of that space between you guys.  If one guy has to get out of position to retrieve a puck, the next closest guy moves.  If we end up with a guy getting the puck behind the net then until he comes out front again, we can move into a box formation again.  If –for example– we have Jiri behind the net on his side, P.A. or whoever here on the opposite end goes to the edge of the slot on the corner of the crease and he waits for the pass just like the one I suggested off of the rush.

The rest of this stuff is up to you guys since I don’t want to overreach and try to meddle with your natural games like we have seen so many others do.  Play fearlessly in every situation and when the time comes to celebrate, don’t listen to Don Cherry or anyone else that says that you can’t do that kind of stuff.  P.K. and Carey want to do the triple low five? Go ahead.  The salute is generic and overdone.  We are neither of those things.

On top of this, suits on game days are optional.  Maybe I’ll wear one, maybe I won’t but if I do, I’m going to do what baseball and football have done right and wear a jersey with you guys.  We’re all in this together and when you’re going past the bench to bump fists with everyone, I’ll line up with the rest of the them and celebrate with you.  I’m the kind of guy that will defend you against the referees and wearing the same jersey as you guys should only solidify that I have your back and that if I expect you all to go to war for me that I’m going to stand on the frontline with you for better or worse.

We are a team and we play for what is on the front of the jersey but don’t be afraid to show your personality and sell a few more of those bad boys with your name and number of the back of them too.  Star power and being recognized in sports is what sets us apart and makes us all profit.  As the Montreal Canadiens, we bring eyes to this game that other teams just cannot and we will continue to do so individually and collectively.  Besides, why wouldn’t I want to wear the best jersey in all of sports with you guys?

I look at this schedule for us and I don’t see a single game that we can’t win.  We won’t just be based on character but also on more championships, not just resting on twenty-four and waiting for the rest of the league to play catch up, no matter how long it would take them.  Character, championships, Club de Hockey. Rock the sweater and rock our opponents, the people will rock the Bell Centre and follow us everywhere we go on the road.

We are the best, we play like the best and we can beat anyone on any given night.

For All About The Habs,