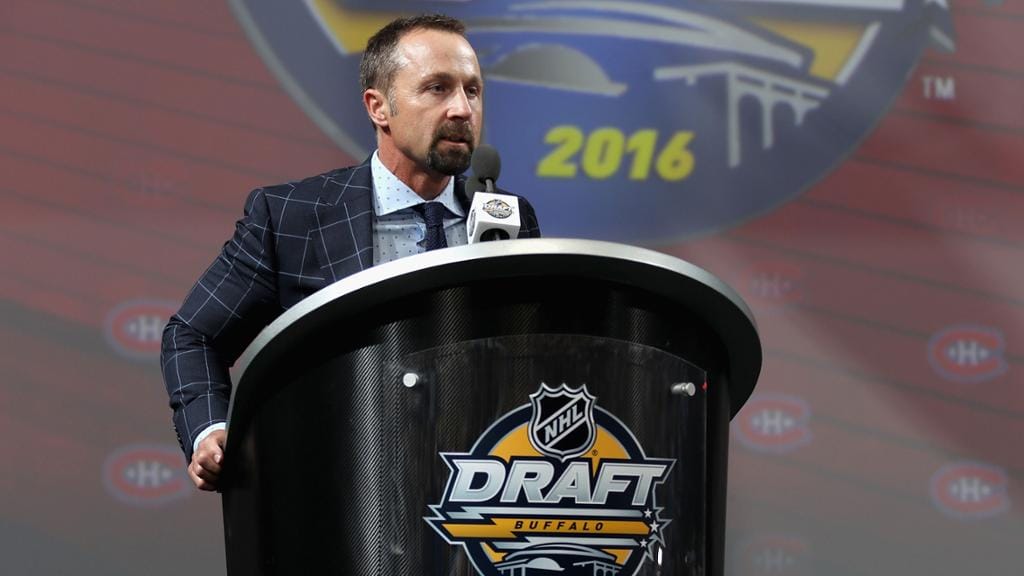 An Examination of Trevor Timmins’ Drafting

The NHL Entry Draft is just around the corner. Although the Montreal Canadiens don’t own a bevy of picks like last year, it’s still an exciting time. Trevor Timmins and the rest of the scouting staff will have just six picks in this year’s draft. Timmins, the Canadiens Director of Amateur Scouting, is considered to be one of the best in the business. Since 2003 (Timmins’ first draft with the organization), they have drafted 82 players in total, including the likes of Carey Price, Ryan McDonagh, Max Pacioretty, P.K. Subban, Brendan Gallagher, and Alex Galchenyuk. So what makes Timmins so good? First this article will examine his tendencies on draft day and then look at how his success compares to the rest of the league.

The selections by weight are pretty much what’s expected. Most players sit between 181 and 210 lbs, fairly standard weights. There are some very slight players, with the lightest being the retired Patrick Johnson (2008).

The below shows the amount of players drafted from a specific league. It goes by where the player spent the majority of the season. If a player spent the same amount of time in two leagues in his draft year, then it goes by the league that the player finished the season in. Players like Jarred Tinordi and Michael McCarron are counted under the USDP, not under the USHL or NAHL, because the USDP plays a variety of exhibition matches against NCAA teams and international games on top of USHL games (previously, NAHL games).

It’s clear that Timmins and the rest of the staff favour Canadian Hockey League players, especially those from the QMJHL. Despite having three different general managers through his time in the organization, this trend remains fairly consistent. Eight of the 19 QMJHLers have been drafted in the past four years, peaking with the quartet of Zach Fucale, Sven Andrighetto, Martin Reway, and Jeremy Grégoire last draft. The OHL sits second with ten, despite four consecutive drafts (2008-2011) where not a single one was selected. The WHL and USHS are tied for third place with nine picks. Besides David Fischer (2006) and Ryan McDonagh (2007), Timmins favours the high school players later in draft, with seven of them selected in rounds three or later. Since Marc Bergevin took over, only players from the CHL, USDP, SHL (formerly, SEL), Allsvenskan, and Liiga (formerly, SM-Liiga) have been drafted. In fact, Timmins hasn’t drafted from Russia since 2009, Czech Republic since 2011, Slovakia since 2005, and Switzerland since 2004. Additionally, Timmins hasn’t selected anyone directly from the USHL since Louis Leblanc and Mike Cichy in 2009.

The CHL favouritism goes beyond draft day. The last five first round picks all played in junior hockey at some point. Louis Leblanc, Michael McCarron, and Jarred Tinordi all played a season or two in junior hockey after being committed to an NCAA program. Although it appeared to the right choice for Tinordi, it’s still up in the air for Leblanc and McCarron.

Unsurprisingly, Canadians are far and away the largest number of draftees. Americans are second, with Swedes being a distance third. The Habs haven’t drafted a Russian player since 2009. Timmins has selected three Swiss players, with two of them becoming NHLers. Swiss defenceman Mark Streit leads all Timmins selections in points with 332 and games with 573. The second Swiss player is Yannick Weber, a veteran of 164 games, while the most recent is Sven Andrighetto, one of the organization’s best prospects and the Hamilton Bulldogs’ top forward. Despite the tremendous turnout from Swiss players (in a small sample size), Timmins’ best success rate lies in Belarus. All three Belarusian players that Timmins has drafted have played over 300 games and amassed over 150 points. Andrei Kostitsyn, Sergei Kostitsyn, and Mikhail Grabovski make up the trio, all drafted between 2003-2005. Despite a solid Czech presence on the Canadiens over the years, including Tomas Plekanec, Roman Hamrlík, Robert Lang, Radek Bonk, Tomas Kaberle, and Jaroslav Spacek, Timmins has selected just one Czech player–Daniel Pribyl in 2011.

Forwards are heavily favoured over goaltenders and defencemen, which is the norm. 29 of Timmins’ selections are wingers, the most of any position. Timmins has drafted just six goaltenders. Carey Price and Jaroslav Halak are the two most successful names, with Zach Fucale looking like he could be an NHL starter one day. In the 2013 draft, not a single defenceman was selected, one of three times in organization history (1967 and 2008). In 2012, just one was selected. Depending on how the chips fall, it very well could be a defence-heavy draft akin to 2011. Additionally, the Habs didn’t draft a true centreman last year. Jacob de la Rose could be that player, but he spent the last two years playing almost exclusively on the wing. Excluding de la Rose, the organization is devoid of centres at both the professional and major junior levels. Expect a centre or two to be drafted as well.

How successful has Timmins been since 2003? Well, it’s still far too early to give a definitive answer, but at this stage he appears to be doing a tremendous job.

As shown above, Timmins hasn’t had an inordinate amount of first and second round picks to work with. He’s only had multiple first round picks once, where he hit a grand slam, picking Ryan McDonagh and Max Pacioretty. Timmins had five second round picks between the past two draft; however, this year, he has none. Through his 11 drafts, he’s averaged exactly seven picks per year (excluding the defunct eighth and ninth rounds). He hasn’t had an abundance of draft picks to work with, which makes his success even more impressive.

In Timmins’ first five drafts, he drafted extremely well. His success rate between 2003-2007 is a tremendous 41.5%. After that, it’s still up in the air, but from what can be fairly evaluated now, Timmins is fantastic at drafting talent. Only the first five drafts are taken into consideration because it’s entirely possible that a player from 2008 makes an “impact” (100+ NHL GP) in the NHL, such as Danny Kristo.

Timmins not only scooped up five NHLers in the first round, but two in the ninth round (which no longer exists). Despite the massive miss in David Fischer, Timmins still has done extremely well in the first round. Andrei Kostitsyn and Kyle Chipchura have carved out very respectful NHL careers, while Ryan McDonagh, Max Pacioretty, and Carey Price are among the league’s best at their respective positions. Later in the draft, Timmins still unearthed great players, including one the league’s elite defenceman in P.K. Subban, as well as Mikhail Grabovski (2004), Sergei Kostitsyn (2005), Guilluame Latendresse (2005), and Mark Streit (2005) to name a few.

In recent years, Timmins has taken Alex Galchenyuk (2013), who was a risky pick but appears to be on track to becoming a star player, and Brendan Gallagher in the fifth round of 2010. Nathan Beaulieu and Jarred Tinordi–a pair of first round picks–both appear to be on their to becoming full-time NHLers. Despite just one top pick, Trevor Timmins seems to have done quite well in recent years. Of course, the jury is still out.

Timmins also surely had a part in the acquisitions of Greg Pateryn and Michaël Bourinval. Pateryn was the Bulldogs best defenceman this past season and appears close to being NHL-ready. Bournival, after a solid rookie campaign with the Bulldogs, made the jump to the NHL. Bournival posted 14 points in 60 games, and was a good two-way player for the Canadiens from start to finish.

How does this success compare to the rest of the league?

The below table compares the amount of games played in the NHL by every team’s draft choices beginning at the 2003 NHL Entry Draft up to the 2013 Draft.

Trevor Timmins and his scouting staff are first, with 6078 games. San Jose is second, followed by Chicago and Columbus. Not-so-surprisingly, Calgary is dead last with 2628 games. Surprisingly, Tampa Bay is second last; however, that can probably be explained by the fact that before Steven Stamkos (2008), the pick who played the second most NHL games was Nick Tarnasky. Hamilton Bulldogs forward, Nick Tarnasky. Detroit, a team noted for their drafting excellence are fourth from the bottom, partly due to the amount of time that all of their prospects spend in the AHL.

Next, is the same table sorted by points.

This time, Montreal sits tenth. It’s not first place, but still impressive. Sidney Crosby and Evgeni Malkin have carried Pittsburgh all the way to the top. Meanwhile, Calgary sits dead last again, largely due to the fact that their two highest scoring draftees are Dion Phaneuf and Mikael Backlund. Tampa Bay sits second last, while Detroit and Toronto hold the third-worst and fourth-worst spots, respectively. Boston sits second, largely thanks to their incredible 2006 draft and the Toronto Maple Leafs.

The below is a table comparing the number of picks that played at least one game in the NHL and how many of those players turn out to be “impact” players. In this scenario, an “impact” player is defined by having 200+ NHL games played. Goaltenders have to have been a starter for a minimum of two seasons. Goons like B.J. Crombeen and journeyman players such as Ryan O’Byrne and Anthony Stewart are excluded from “impact” consideration. In order to avoid excluding young players that are solid NHLers, players under the age of 24 (or have three full seasons of NHL seasons or less) are given a set of special requirements. All young players must have at least 40 games played. Forwards have to either produce at 0.50 point-per-game rate, and/or have a 40+ point season. Defencemen are 0.20 points-per-game and goaltenders must have appeared in at least 41 games in a season.

Despite sitting 17th for most picks that have at least one NHL game, Montreal comes out on top for most “impact” players, with 15. Nashville is right behind Montreal with 14 players. Calgary and Tampa Bay continue their dogfight for last place, while Toronto comes in much higher than in the previous two charts.

Finally, here’s the percentage of picks who have played at least one NHL game and went on to become “impact” players, which is under the header “C”. Once again, goons and journeymen are excluded and the same set of requirements are used.

Once again, Montreal comes out ahead with an impressive 50%, more than five percent more than second place Washington. Ottawa, Nashville, and surprisingly, Toronto, round out the top five. Toronto, despite being 24th and 27th in the first two tables, winds up near the top.  Once again, Calgary and Tampa Bay sit in the final two spots.

Like the first two tables, it still has its flaws. Very much like the art of drafting, this isn’t an exact science. It’s not perfect, but it does give a good overview to which teams excel at the draft.

It’s clear that the Montreal Canadiens, led by Trevor Timmins, are one of the best drafting teams in the NHL. Like every scout, Timmins has his fair share of misses; however, he also has hit numerous home runs. With just six picks in this year’s draft–the highest being 26th overall–chances are it won’t be a roster-defining draft. But the great thing about Timmins and the rest of the scouting department is that it’s not out of the realm of possibilities.